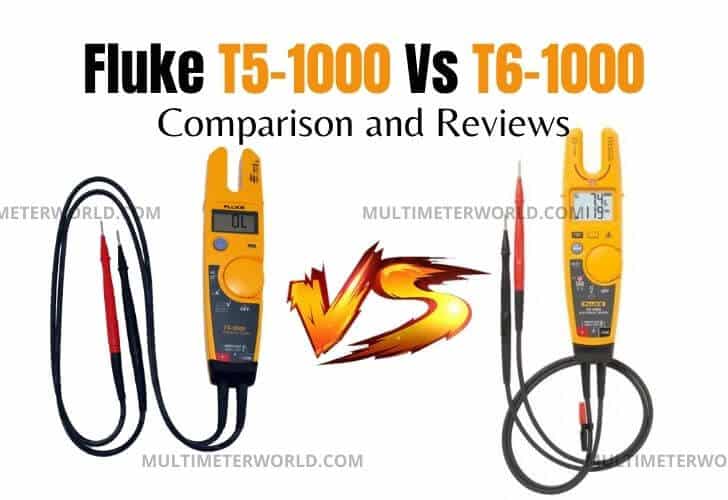 Confused about Fluke t5-1000 vs t6-1000 electrical comparison. The Fluke t5-1000 or the Fluke t6-1000? In this article, I will take an in-depth look at both of these Fluke meters and see how they compare. I will look at features, specifications, pros, and cons, and more! So, if you are trying to decide which Fluke electrical testers to buy, let's get started

If you're looking for an electrical tester that's easy to use and quick to accurate, look no further than the Fluke T5-1000! This handy little electrical tester is perfect for any electrician or DIYer. With its Open Jaw current measurement, you can easily test currents without breaking the circuit. If you're interested in other Fluke clamp meters for higher ranges then Click here. Plus, it's been certified to withstand a 3-meter drop test, so you know it's tough enough for any job. For more details, Let's have a look at its key feature. 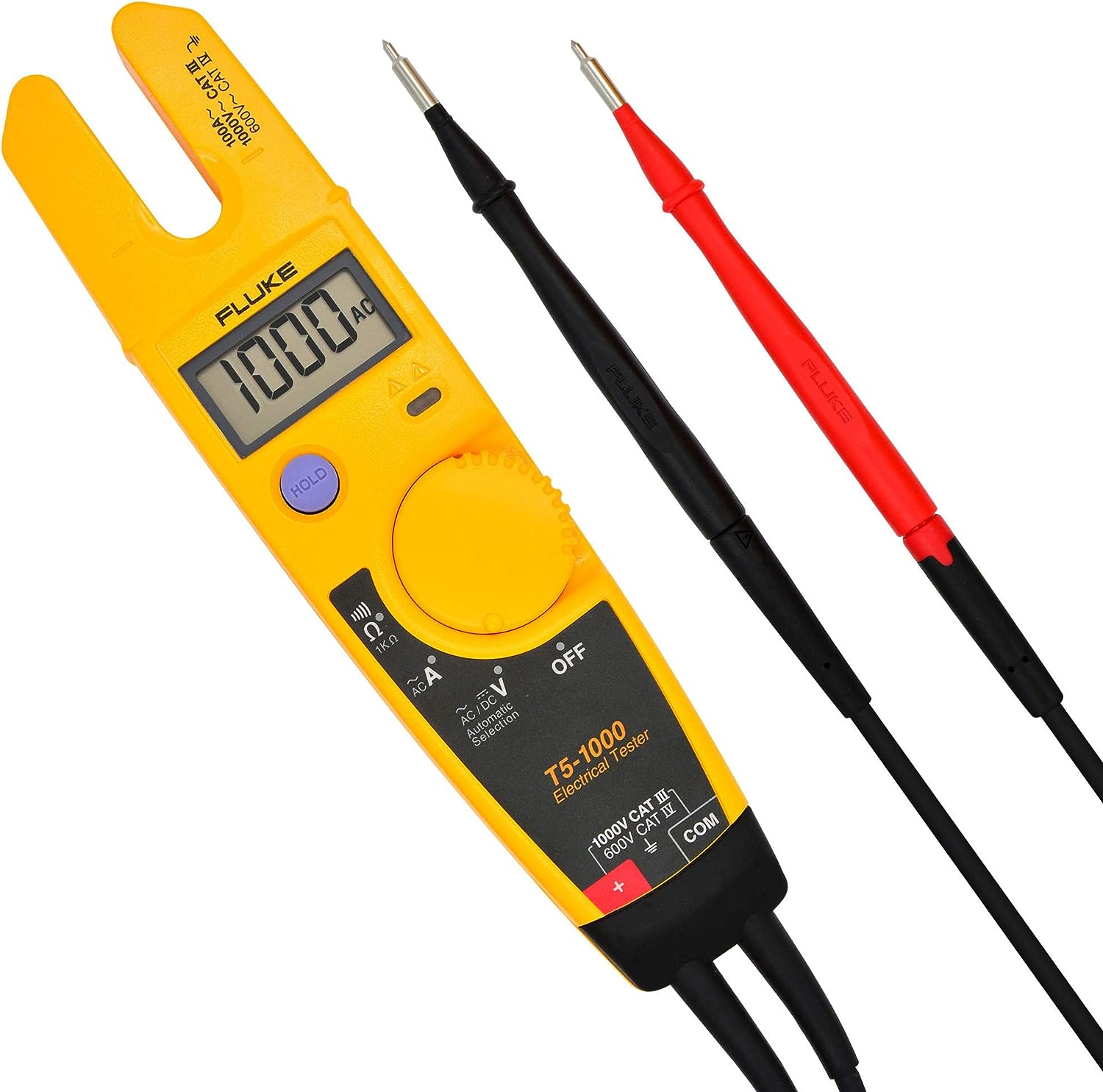 Auto-ranging: The Fluke t5-1000 can automatically select the appropriate range for you, making it easier and faster to take measurements.

AC Voltage: You can measure AC voltage up to 1000 with CAT-III test leads.

DC Voltage: If you're an automotive technician, DC Voltage measurement is a must. You can measure voltages up to 600V with CAT-IV-rated test leads.

AC Current: You can measure AC current only up to 100A.

Resistance: You can also measure resistance up to 1kΩ

Data hold: This allows you to hold the current reading on the screen to write it down for later use.

Low battery indicator: This lets you know when the batteries are running low.

Additional Features: This meter can perform both continuity and diode tests. If you still want more features in your electrical tester then Klein CL800 and CL900 needs your attention.

The Fluke T6-1000 is a top-of-the-line electrical tester perfect for home or professional use. With a more prominent display and backlight option, it's easy to see readings even in dimly lit areas. Moreover, the open fork makes current measurement a breeze. You can also measure voltage with or without test leads, making this tester a versatile option.

And don't forget about the resistance, frequency, and continuity tests! Whether you're a contractor looking for a quality tool or an everyday homeowner who wants to be prepared for anything, the Fluke T6-1000 is precisely what you need. 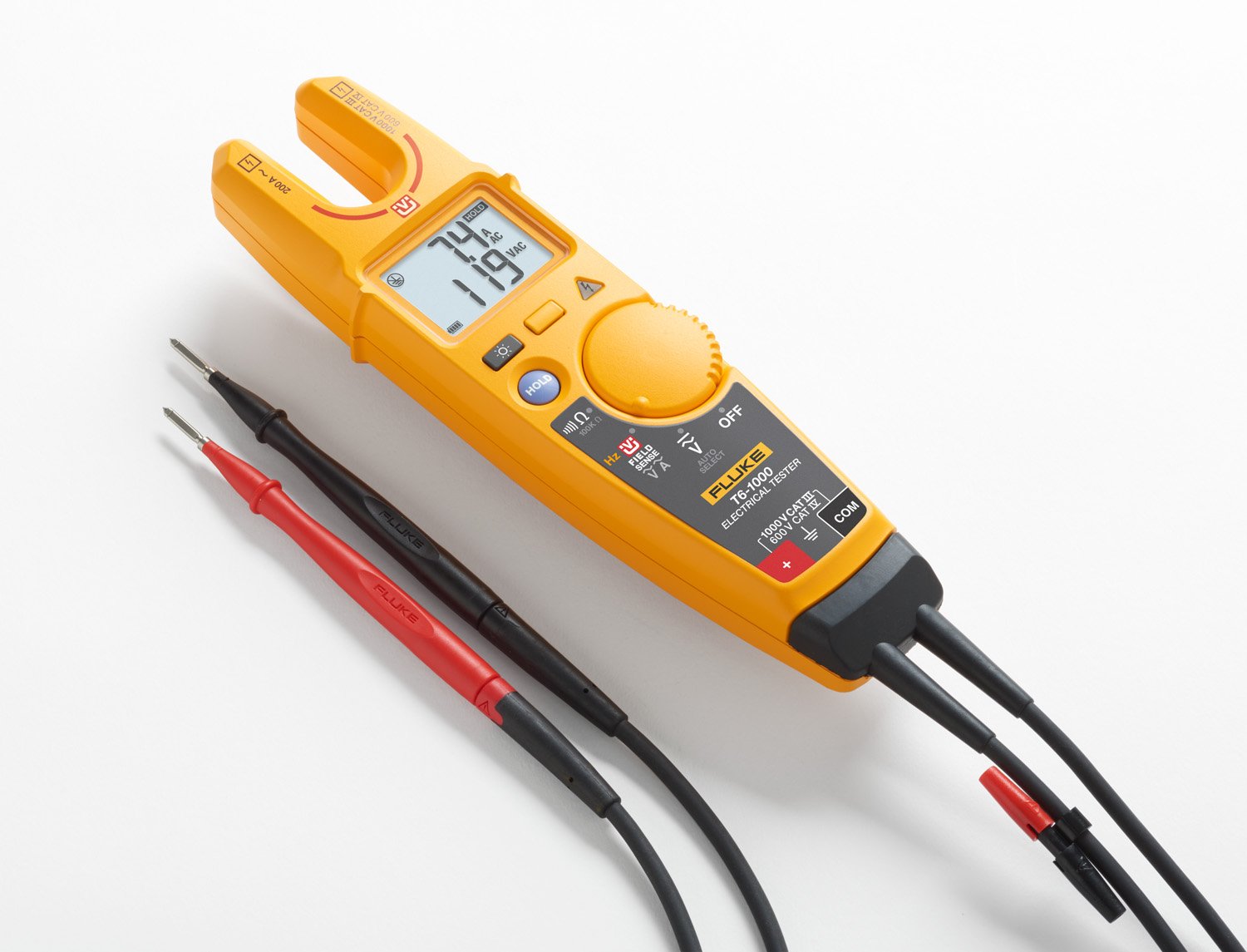 Display: It comes with a bigger and better display to see readings even in dimly lit areas.

Auto-ranging: As it's an auto-ranging tester, it can automatically select the appropriate range for you.

Open fork: With its open fork of 18mm, you can measure current and voltages.

AC Voltage: You can measure AC voltage up to 1000V with CAT-III standard test leads.

DC Voltage: This electrical tester can also measure DC voltage up to 1000V.

AC Current: It has a fork size of 18mm, so you can easily measure current up to 200A.

Field Sense: It's not like traditional NCV mode, but this allows you to measure voltage even without test leads!

Resistance: You can measure resistance up to 100kΩ.

Continuity: Continuity and diode test both can be performed with the beep alarm option.

Frequency: With fluke, T6-1000you can also measure the frequency of any ac/dc circuit.

Data hold:  You can hold the reading on display with just one click.

Both Fluke testers have their own pros and cons. In comparing the fluke T5-1000 vs T6-1000, one thing is obvious. If you're looking for an electrical tester with higher ranges, the Fluke T6-1000 should be your choice. But if you're somebody who wants an electrical tester for home or DIY use, you must go for the fluke T5-1000. If you're still not sure then consider fluke 323 or 324 for high ranges. Do you have any experience with either of these Fluke electrical testers? Let us know your thoughts in the comments below!

What's the difference between a multimeter and a clamp meter?

For more details about Multimeter vs. Clamp meter, Click here!

Which Fluke electrical tester is better, fork-type or clamp type?

There's no simple answer to this question as it depends on your specific needs. If you need to measure AC current in confined places, it is better to use a clamp meter. Otherwise, if there are not too many close points, you can also use Fork-type electrical testers.

How to measure dc amps with a clamp meter?